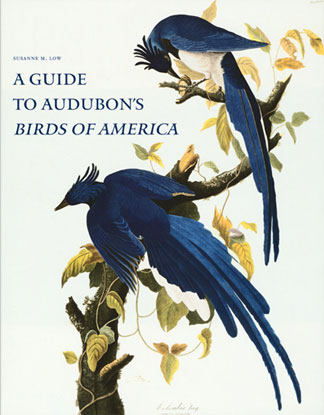 Donald A. Heald and William Reese Company are pleased to announce the publication of A Guide to Audubon’s Birds of America by Susanne M. Low, a comprehensive reference work for collectors, dealers, art historians, students of natural history, and bird enthusiasts. This beautifully produced book provides the reader with easily accessible information about each one of the 435 plates in the double elephant folio, including variant plate names, names of the birds in the octavo and Bien editions, and the current names of the birds according to the American Ornithologists Union’s most recent Checklist, as well as pertinent historical details about the creation of each plate and discussion of taxonomic changes. A special feature of the book is the section devoted to the description of each of the plates in the comparatively little-known Bien edition. This section compares the Bien plates with sister plates in the double elephant folio and octavo editions, noting changes in nomenclature (including current names) as well as describing differences in the images in each edition.

The informative introduction details the history of the creation of the double elephant folio. This includes a description of the collaboration between Audubon and the men who transformed his originals into prints, W. H. Lizars, Robert Havell Sr., and, most importantly, Robert Havell Jr., with discussion of the artistic techniques involved in the process. Ornithological taxonomy is also succinctly explained, and will help the reader to understand some of Audubon’s difficulties as well as the evolution of bird names.

The descriptions of the double elephant folio plates are followed by three indexes: one of current names of the birds depicted, one of double elephant folio plate names, and one of the names on the original paintings, thus offering the reader several ways to locate a particular bird or plate. Similarly, the Bien section is also followed by indexes of current names and plate names. In addition, there are three appendices. The first identifies the persons whose names appear in the nomenclature of The Birds of America. The second appendix describes the unusual composite plates that appear in some editions, and the third contains charts of the most complicated situations that arose from the transfer of Audubon’s originals to the finished plates. Finally, a beautiful color insert illustrates a few of the more interesting situations that are described in the book, such as color differences between prints of the same bird, comparison of an Audubon original and corresponding print, and comparison of variant plate legends, among others.

Mrs. Low has been associated with the American Museum of Natural History for over thirty years, fifteen of them as a trustee. Her previous work on Audubon has been extremely well-received. This book, with newly up-to-date information, revisions, and extensive additions (including the Bien section) supersedes and surpasses her earlier work, offering the reader magisterial command of data about Audubon’s prints and the birds depicted by him in a single attractive volume.

A Guide to Audubon’s Birds of America by Susanne Low is offered at the retail price of $50.00 plus shipping and handling; dealers please enquire for the discount schedule. Orders may be placed with:

Sorry, there are no recent or upcoming events at this time.